Triple or 3 x the pleasure 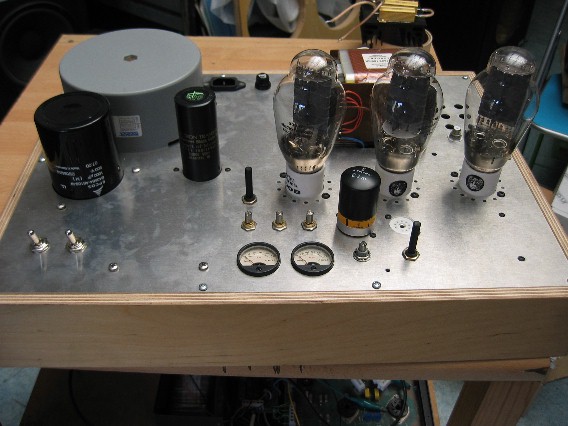 This project is a continuation of the Kurt Kr52bx project but with std 300b that operate well within their specs and limited to a reasonable power.

High power mono blocks are always in demand, so that was on my mind since I didn't want to venture anymore in tubes costing hundreds of euros and burning up very fast with companies that don't honour there warranty think of Krenterprise and Kraudio and AVVT and Emmissionlabs and probably the same tubes are sold under other brand names but it is always the same, and imagine this especially with 3 per channel if you need that guarantee.

Triple is like the name mentions based on a triple Parallel single ended configuration of 300B's, the circuit is simple and uses standard design principles, nothing exotic and is well measured, with the Boully 88 I learned to my own surprise that measurements help fasten the optimising procedure and that indeed good measurements often are confirmed by listening as being better but not always as long as they haven't been obtained by extra circuitry.

I also wanted to use the C3m in this design ( and in a few new designs as well ) as this little tube is sexy and even on the datasheet it looks extremely promising, the problem with this tube is its low gain , a µ of 10 as a triode, rather relegates it more to an output power tube , maybe for a new project putting 10 in parallel and making a Push Pull amp.

2 configurations possible, triode or penthode, will try both .

The output transformer, I stick with Lundahls as they are excellent, I haven't really heard better ones yet and this is no compliment just in vain. The LL1627 was chosen as 3 parallel 300B's can easily be loaded with 600 ohms , this is connection ALT D or eventually ALT C, and the low inductance of 9H is not a problem as the 3 300B's don't need much , the frequency graph confirms this, from 14Hz full power is obtained this is excellent.

The driver stage also uses a Choke loaded configuration, a LL1668/25ma for optimum loading, the benefits are tremendous, so I stick with this technology .
An Elna and a mkp capacitor and a Dale resistor fulfil the cathode requirements.

If used as a penthode , the LL1668 is paralleled with a 82K resistor for improved linearity,
And a zener reference is used to bias and supply current to the 2nd grid, the cathode resistor is changed by adding another 560 ohm resistor in parallel and the trick is done, the gain approaches a µ of 35 , which is sufficient for any pre amp.

Resistors std ceramic where it doesn't matter and Top quality Dale where necessary.

The high voltage is a mere 400 volts on the 300B's and they are not pushed to extremes, 65ma per tube. Should give a 20 Watts of output power at very low distortions and long life as well. For the start up there is a relais sequence, this is absolutely necessary as with the choke input filter. The voltage can rise to 700volts if you forget the stand bye switch and the capacitors cannot handle this ( I learned the hard way ) .

This is a little circuit powered with the 6,3 volt and uses a timer that always counts 30seconds before powering up.

I measured on ALT D 50 watts with loads of distortion , relatively clean with 12,5 watts but overall not satisfying , lots of 2nd harmonic and lots of 3rd harmonic ect , can be a very good match if you need that added distortion for listening to older recordings that lost some of their harmonics !!!!!!!

I measured on ALT C , 38 watts of relatively clean output power , same 50 watts with loads of distortion , but below 38 watts very clean signal , ( at 38 watts the grid is swinging to 0 above we are in class A2 ) bandwith is excellent see graphs

This was all measured with the C3m in triode connected, for 17,5volts ( 19Watts on Rload ) I need 6,5v input voltage on the C3m's grid!!!!
A tube pre amp can deliver this without a problem, for transistor pre amps more of a problem.
C3m connected in penthode, just 1,5v is needed on its grid for same swing on load.
First I was afraid I needed Rx // to the choke because the gain of a penthode is the slope ( mA/v ) multiplied by Rl, since the choke is not a linear Resistance but a frequency depended one. I was afraid this would alter frequency graph a lot, but actually there is 3 x 83K in parallel from the negative bias so there is a Rx already of 27,5k approx.

Penthode connected, signal looks very slightly worse, gain is much improved. I have not listened yet to this configuration because while writing the report it became clear to me that people who will own this will also own a tube pre amp and that one can certainly drive 10volts peak at least without a problem.

Monoblock configuration on a not too big chassis, good looks and easy to build, I'm in love with it .Its nice to have an amp of this quality without having 1250 volts on its plates , as an accident can always occur and 400 volts on the plate is rather easier to work with then 1250, however I still advice everyone to be extremely cautious as this is no joke with the big capacitors in place. 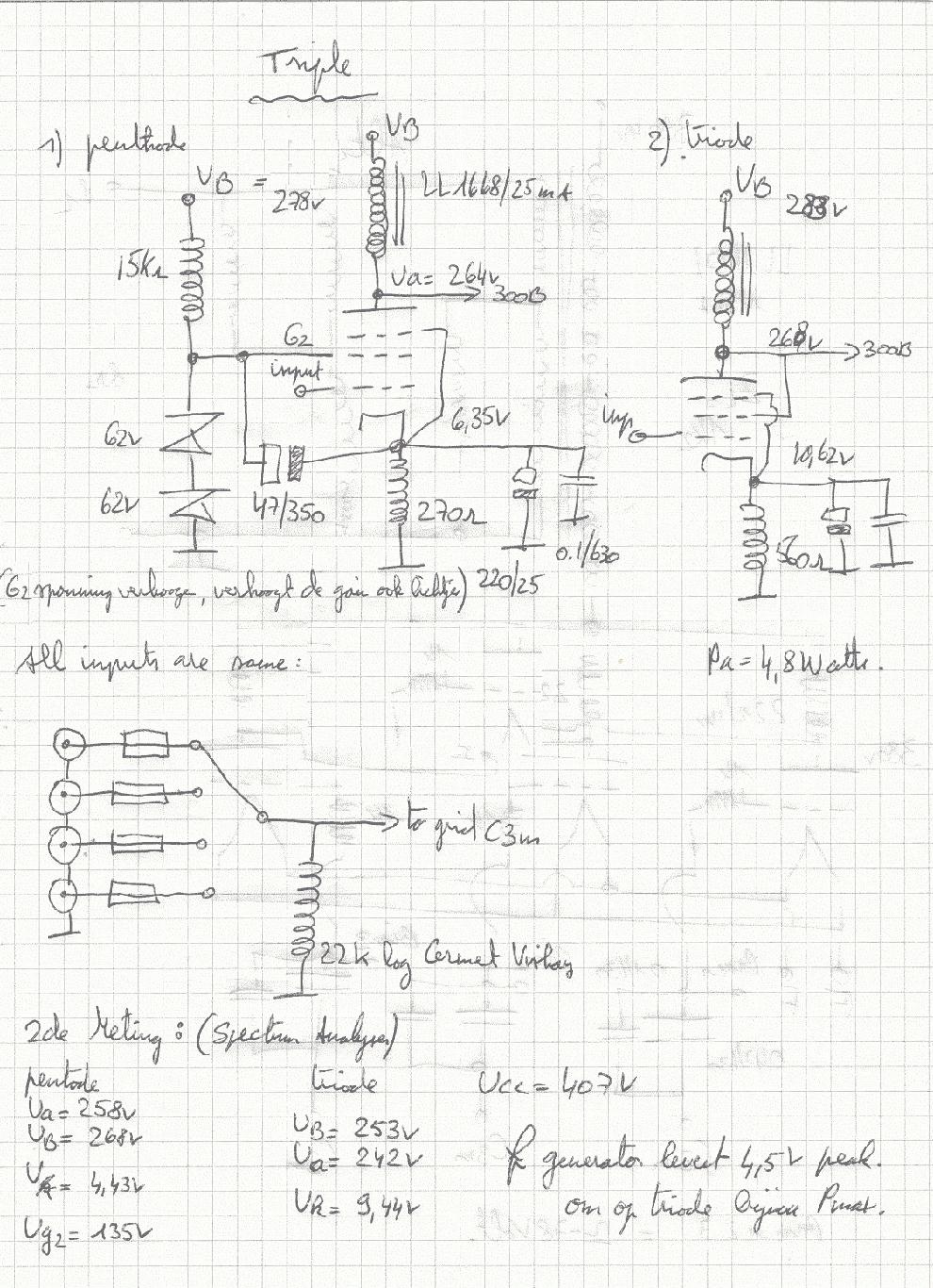 Measurements of triode versus penthode connection 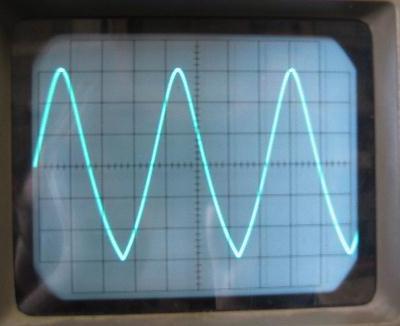 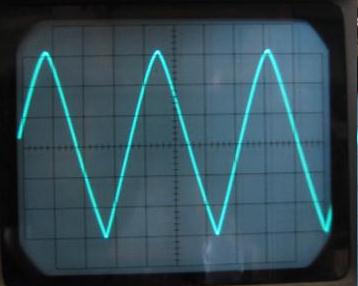 The left is the penthode connected C3m and the right is the triode connected version, output voltage is the same but gain is not.

Black Gate for the output circuit , a 2 x 100µF is used , the audio returns through this capacitor so it is highly critical here , and is well spend money .

The diodes are BYV26E types , they currently belong in the group of fastest soft recovery diodes and are excellent.The new CREE shottky high voltage diodes offer no advantage here because the current is to low.

For the filament rectification, parallel 1N5822 Schottkys are used, I tried 10A/100v schottkys but they loose to much voltage and voltage dropped to 4 volts which is too low .
Also a choke is used to reduce the current spikes, and a 10000µF/35v Hitachi is used, the audio is shunted through this one and an extra mkp back .

Negative bias supply is used to supply the 20v 125mA filament power to the C3m, then a doubler boosts this to 140v DC for use of negative bias to the 300B's.

NEVER run the high voltage power supply line without tubes as a load , this will damage the Black Gates and the Siemens , always use the stand bye switch or disconnect from first choke.

All 300B's are polarised at -85 volt for starters
Filament voltage = 4,8volts under full load
See schematic 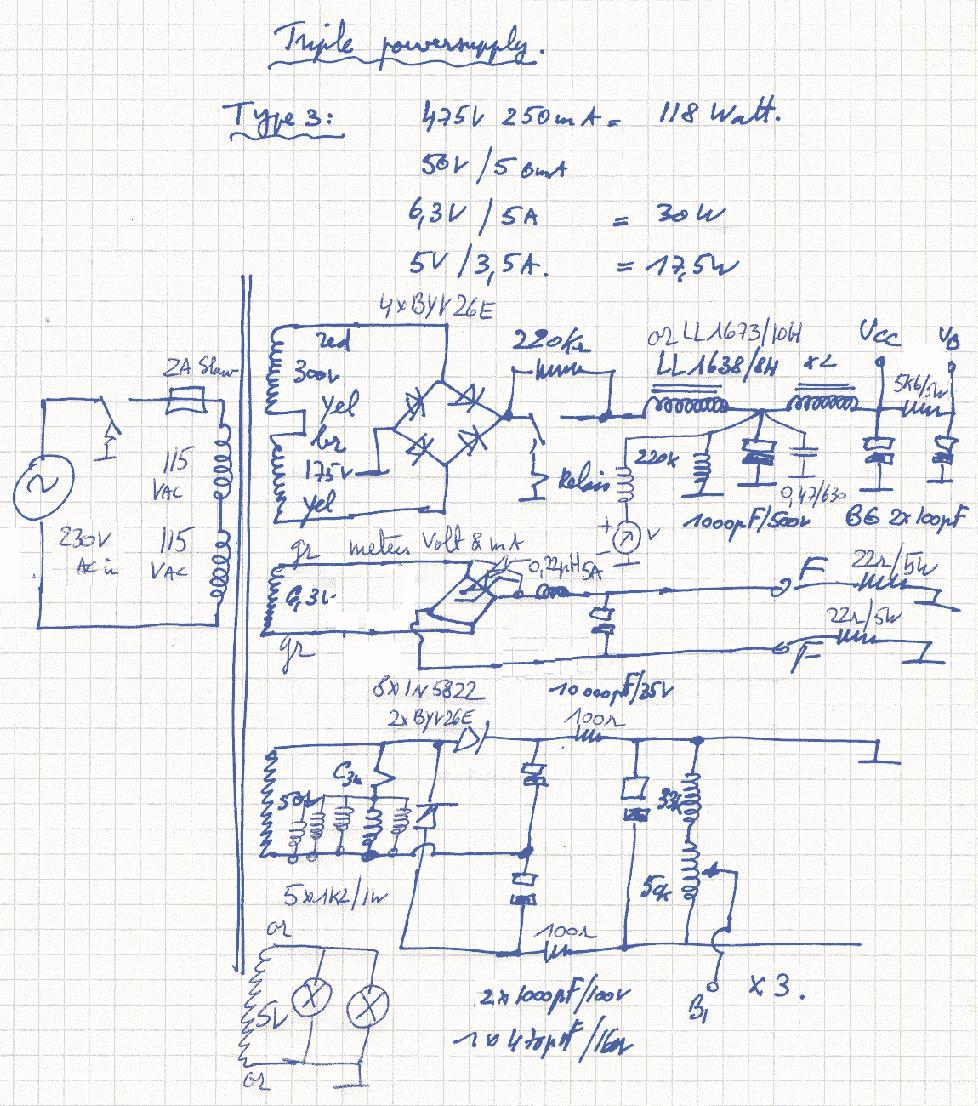 Sound is good and the spektrum analyser shows this to be true. 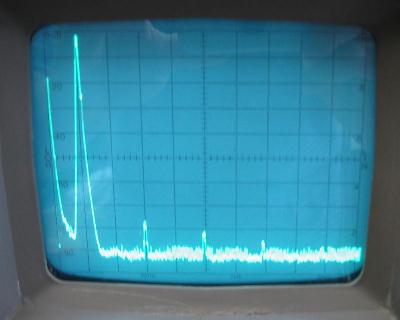 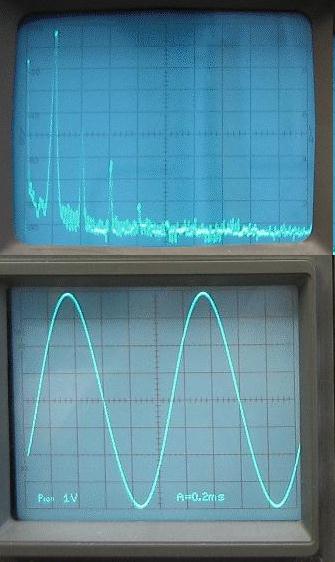 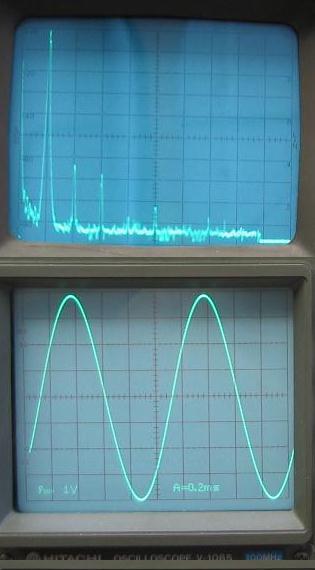 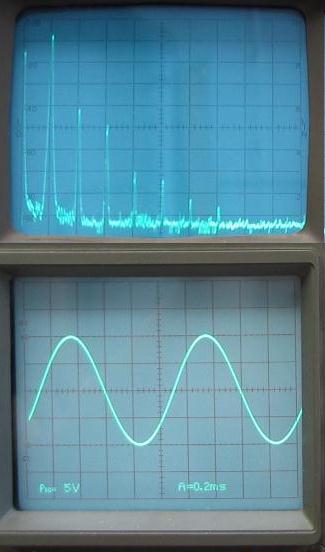 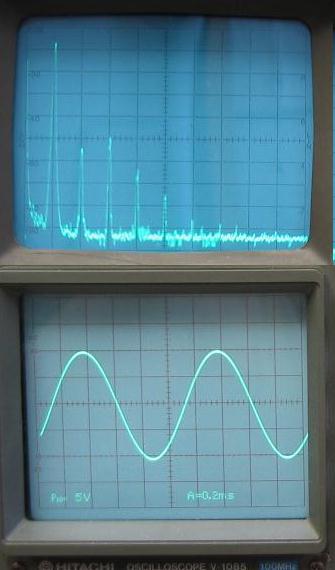 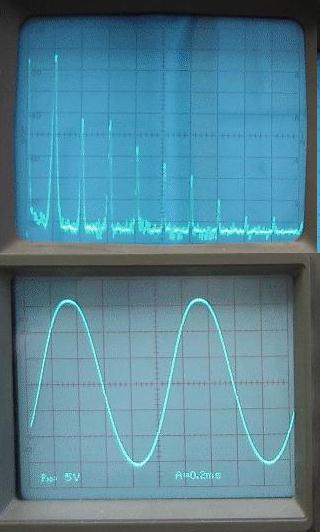 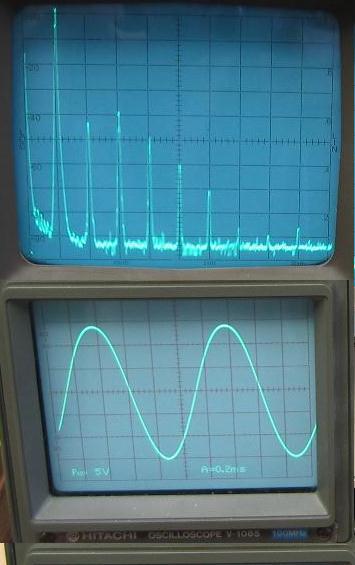 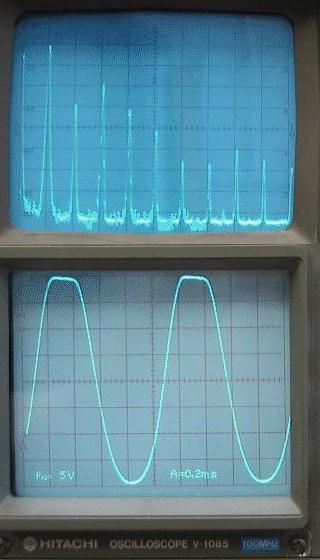 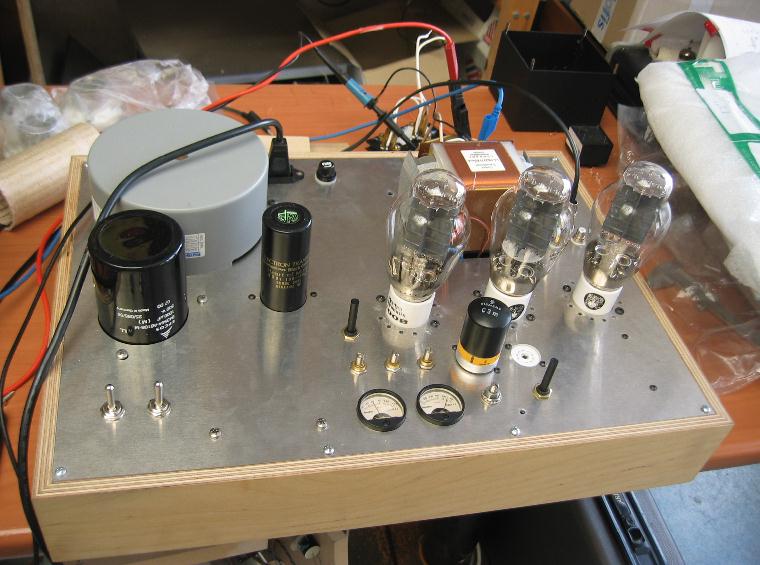 A few pictures of the beautifull inside of this amp 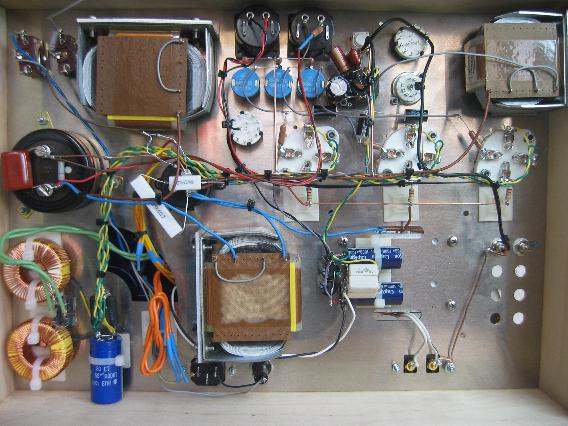 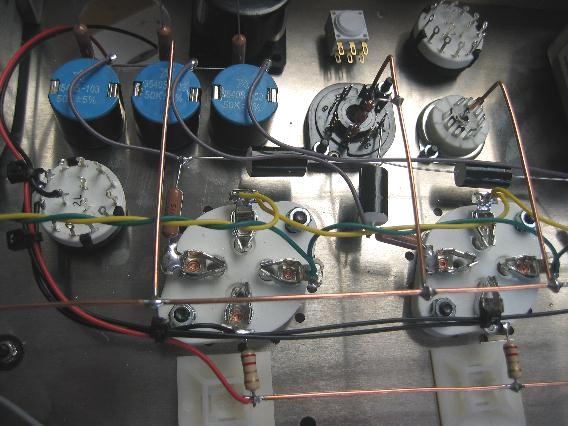 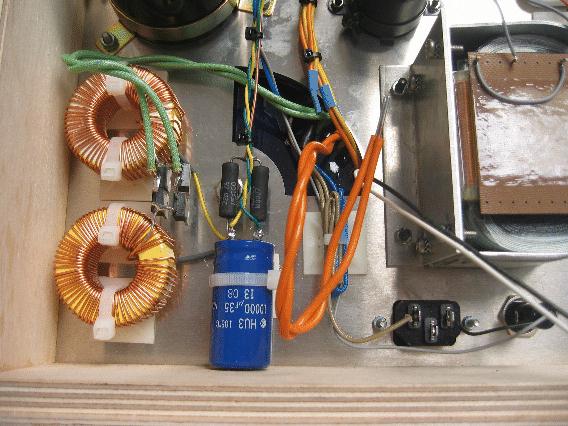